After several months of work we are proud to announce the completion of a short film. We tell a story of Constantinople in the fifteenth century during the birth of the genoese combat stick. We used original dress and all fencing is strictly real. As soon as possible we will publish on these pages a low resolution trailer of a duel with some shots in slow motion.

In the more characteristic armory of the Ligurian coast we are just starting to shoot a new video about our beloved genoa defense stick. We are proud to anticipate that we have found the camera and all the necessary service for lighting. Soon we hope to publish a preview of the footage that we have shot.

We are proud to announce to our visitors the overall success of the campaign thanks to which we are in pole position in the results of our beloved genoese combat stick on most important search engines, such as msn.com, virgilio.it and google. Recently we were also included in google directory and on dmoz.org in sport / combat / fancing / old fencing section.

We are developing an historical photo and publications archive for out registered users. We are preparing a section with pictures of out brothers in defense fencing training and in extreme combat sport situations. We will include the original special release published in the Italian newspaper "Repubblica".

A selection of stickers from Savona is living a dream from 2004, lighting up their eyes and warming their hearts (as well as their hands ;-). All combat fencing lovers from Savona are invited to contact the webmaster if they are interested in sharing this passion together and become friends first and then stick companions. One note: the genoese defense stick was born and remains an art of real combat and we involve a great deal of effort trying to keep clear in our minds the origins of our combat sport when we meet (read: this sport is hard). 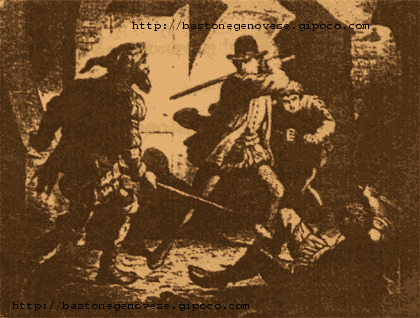 The first time we talk about Genoeses brandishing the stick as a weapons is across fifteenth and sixteenth century AD when the Ottoman Sultan had forbidden to carry weapons. At that, Genoese sailors, with the usual well known convenience, were escorting merchants as guards, handling the stick with two hands, fencing the stick with the sword defense technique.

Also this year we gathered at Castagna (Genova - Italy) for the traditional opening day of the academic year beginning in which we meet without crossing the sticks, just like good friends who meet each other after a summer without sport training. Our Master praised us showing some old original photos of great Savate masters with sticks and fencing, including the great Lazzaro Delfino! Soon we will scan every document to share them for free on this web-site.

After the arrival of new brothers, we have bought a stock of rattan sticks in two sizes. They are suitable for fencing with the old genovese stick with a hand and a half and that the one hand stick. Obviously our sticks are absolutely ready to all the martial arts, because even after intensive use it smashes and crushes in fibers and does not break. Please can contact us as usual by email if interested. 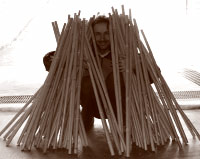 Two brother covered with wood for the joy of the arrival of the new sticks.

This year, out "Defense Stick Brotherhood" group is dedicated to research and to deepen the history of the Genoese stick and all defense-related arts. The historical research and insights about auto-defense have resulted in the knowledge of "Gambetto", an ancient body to body martial art born in Genova, particularly aimed at disarmament from knife. The library search culminated in the accidental (but wonderful!) Knowledge by a brother of the "Barba" - a very old master - who was for a short period the last depository of our sport.

On April 22, 2007 some of us participated in the Exhibition of "The Morsasco Winged Knights" in the province of Alessandria. The falconry is a ancient charming art and has not failed to attract many spectators and the media who have crowded at the gates of the ancient castle of the XII century. We were literally assaulted by the curious and didn't miss the shooting of our regional television. We also had the privilege of working alongside a mature man who showed old times toys of our grandparents. 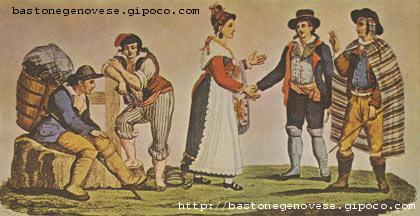 On May 14, 2006 third stage of Genova Defense Stick was held in Savona at SMS Serenella. Obviously, the complete Brotherhood, wisely guided by Maestro Claudio Parodi, has helped the "defense stick brothers" in Savona, who worked hard to make the event so magical as always. The SMS gave food to all hungry brothers and the fencing guests, who took a lunch to test the greedy "Sticker's Lunch".

We made a demo DVD to promote our defense sport around the world. After a brief introduction, a menu inspired by our pictures wearing combat dresses, the viewer get access to the video choice. All videos from the "Genova Stick Brotherhood" are also available, as well as a brief promotional conference at the Homeland History Association.

Obviously, if You are interested to join the "Genova Defense Stick Brotherhood" to deepen the historical point of view and the practical wooden magic of genoese combat stick, please send us a request via email at info AT gipoco "." com. Il You are interested in listening or participating in a live stick lesson, contact us and come in Genova to meet us on Monday or Wednesday night.

This site is hosted and maintained for free. Any offer - also the little ones - is welcome and will not enrich us. It will alleviate the suffering and sacrifices in terms of hours of work employed to keep alive, rewarding, fast and secure this humble site. Thank you all in advance for what you will offer (even a hard drive should be fine :-)

Over the past six months web-site accesses rose and consequently the new beat pushed us higher in rank lists. We receive your contacts with great pride. They give us strength in this humble mission to popularize the tradition of defense stick fencing. The translation is in the first stage and first results are here. We hope soon to put on-line the new version.

All textual contents have been released under Creative Commons License v4.0 BY-NC-ND - Video/Images: copyright by owners.